The working principle of vacuum pressure swing adsorption (VPSA) oxygen generator is to use lithium molecular sieve to selectively adsorb nitrogen in the air, so that oxygen is accumulated at the top of the adsorption towers as product gas output. The whole process includes at least two steps of adsorption (low pressure) and desorption (vacuum or negative pressure), and the operation is repeated cyclically. In order to continuously obtain oxygen products, the adsorption system of the VPSA oxygen generator will consist of two adsorption towers equipped with molecular sieves (assuming towers A and B) and pipeline-valve assemblies. The compressed air enters tower A after being filtered, and oxygen is collected through adsorption. To the top of the adsorption tower as product gas output, at the same time, the B tower is in the regeneration stage, when the A tower that is in the adsorption tends to be saturated, under the control of the controller, the air source turns to the B tower for adsorption Oxygen production, two towers cooperate to circulate, realize continuous production of oxygen.

The adsorption system consists of two adsorption towers equipped with zeolite molecular sieve adsorbent and pipeline-valve assemblies. The compressed air at normal temperature and low pressure enters from the bottom of the A tower. When flowing through the adsorbent layer, nitrogen, carbon dioxide, water vapor, etc. in the air are adsorbed. Oxygen is collected to the top of the adsorption tower through the adsorption bed as a product gas output. At the same time, the B tower is in the regeneration condition. When the adsorption tower for adsorption is about to reach adsorption saturation, under the adjustment of the control system, the normal temperature and low pressure air is transferred to the B tower to start adsorption and oxygen production. Towers A and B alternately take turns to achieve the purpose of continuous oxygen production. 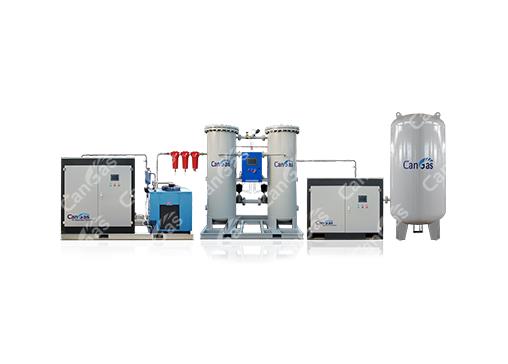 prevPrevious back nextWhich method is more cost-effective, between bottled oxygen and molecular sieve (PSA) oxygen generator?
×
Dear customer who is interested to be CAN GAS distributor, kindly fill in the blanks below and we’ll start evaluation right away.