For enterprises that need oxygen long-termly, there are two ways to obtain oxygen gas, one is direct purchase, the another is producing by their own. It is easy to understand the direct purchase, but self-production means that initial investment is required to build an oxygen generation system; In the short term, it is convenient and economical to purchase and use oxygen gas, but if the demand for oxygen is long-term and sustainable, the total cost of direct oxygen procurement may not be cost-effective.

At present, there are two types of common oxygen purchase. One is liquid oxygen, which is filled by cryogenic air separation gas station and transported to the gas consumption site; then transferred to the low-temperature storage tank at site, after being vaporized, oxygen gas is supplied to all gas consumption points. This is suitable for customers who need a large amount of oxygen, with a monthly consumption of 30 tons – 400 tons. Another is of gaseous oxygen, which is filled from the gas generation station to the high-pressure cylinders, transported to the gas consumption site. Each cylinder is about 50kg (40L specification), containing 6Nm3 of gas, and is suitable for enterprises with small oxygen demand.

The price of liquid oxygen is slightly cheaper than gaseous oxygen, but the liquid oxygen tank needs larger space; and about 10-20% of the oxygen stored in the liquid oxygen supply system will be lost due to evaporation. In addition, there may be hidden dangers caused by the accidental release of a large amount of oxygen, so it calls on high safety.

The problem for gaseous cylinder oxygen is evaporation loss, so it cannot be stored for a long time; In addition, during the transportation of oxygen cylinders, it is necessary to avoid violent collision and avoid being close to high temperature.

This shows that although direct purchase of oxygen seems to be cost-effective, transportation and management is an implicit cost. In the case of oxygen gas self-production, although an initial expenditure is required at the beginning stage, the main cost comes from power consumption in the production stage. Based on the system assembly experience in CAN GAS and taking the purchase and use costs of oxygen cylinders as a reference, the users can reclaim their investment in about 12 to 18 months with the molecular sieve pressure swing adsorption (PSA) oxygen generation system. 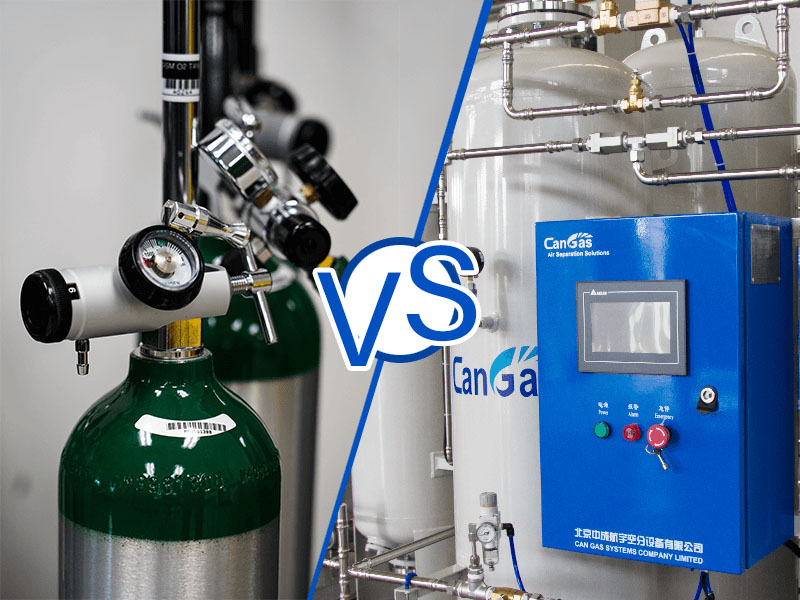 prevPrevious back nextWhat is the difference between an oxygen generator and a ventilator
×
Dear customer who is interested to be CAN GAS distributor, kindly fill in the blanks below and we’ll start evaluation right away.